The ancient Mediolanum, as it has been called by the Romans since the third century B.C. (a name of Celtic origin meaning "in the middle of the plains"), rose up around 400 B.C. It was the capital of the Western Roman Empire, and thanks especially to Saint Ambrose, it became one of the most active centers of the new Christian world.
Around the year 1000 it was already the most heavily populated city of Italy and became the most active center of the Padana Plain because of its manufacturing of wool, silk, metals and armaments. 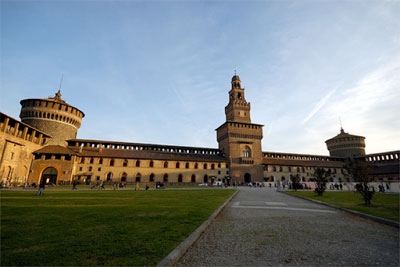 From the 14th to the middle of 15th centuries Milan came under the family Visconti and in the 1447 the Sforza family took the power and Milan became the capital of the dukedom of Milan. At the end of the 15th century Louis XII, king of France, took over the Dukedom. The French in 1535 gave way to the Spanish, who governed until the beginning of the 18th century. In 1707 Austrian controlled the city. With the exception of the Napoleonic power, the Austrians ruled until the celebrated "Five Days of Milan" (1848), a revolutionary independence movement that chased out the Austrians permanently. During the Second World War Milan was one of the cities which got most heavily hit by aerial bombardment.
Damages to historical monuments were especially serious; some were destroyed forever, but most were later restored. Since 1946 the recovery of industrial, economic and commercial activity has occurred rapidly, so that once more Milan has become the center of Italy's productive and economic life.

Besides fashion, has plenty of architecture and culture to offer Gothic and Renaissance fans. Although considered by many to be more European than Italian, ’s contributions to Italian history and art can still be found beneath the polished and commercial atmosphere.

A great place to begin exploring that history is at the Castello Sforzesco, or Castle Sforza. Construction on the castle originally began in 1450 by Francesco Sforza, the fourth Duke of Milan and one of the city’s condottiere, or hired mercenaries. Although it has been destroyed and rebuilt several times, the fortress-like castle still shows signs of the two powerful families who ruled Milan in the 14th century – the Visconti and Sforza dynasties. On the front of the castle is the Visconti family emblem: a viper with its jaws open wide swallowing a child. The design of the castle shows evidence of turbulent times in which the Visconti and Sforza families ruled. Rows of seemingly decorative arches line the outer walls that were actually built to disguise holes used for pouring boiling oil on attacking forces. The castle walls were also constructed with strategically - placed square openings that could be used for scaffolding to make repairs on the roof and walls easier.

At the back of the castle, visitors can see what remains of the secret passageway the duke and his family could use to escape during times of trouble. The hallway leads from the interior rooms out to the moat and continues all the way to the delle Grazie, which is where Lenoardo da Vinci’s The Last Supper is housed. Because da Vinci chose to paint the fresco with oil pigments on dry plaster instead of working with the traditional wet plaster method, the painting has rapidly deteriorated. After restorers spent years cleaning and retouching the paining, its original colors have been brought back to life.
Posted by disha patel at 8:12 PM No comments: Links to this post

Posted by disha patel at 6:26 PM No comments: Links to this post Posted by disha patel at 6:19 PM No comments: Links to this post

What today remains of the old Sforzesco Castle is only a part of the original building restored by the Sforza family after the Milanese citizens had destroyed the Visconti Castle in 1447. At present, the Castle is a quadrilateral enclosing the PIAZZA DELLE ARMI, with its central tower facing the city designed by Filarete and later restored by Luca Beltrami and two cylindrical towers covered with bosses on each side (the TORRIONE DEI CARMINI and TORRIONE DI SANTO SPIRITO). At the beginning of the 20th century, some new buildings, which now house offices, were added to the walls facing south and west. The TORRE DI BONA DI SAVOIA is built on one side of the Rocchetta, just near the place where there was the old PORTA GIOVIA, one of the medieval gates providing access to the city. The FOSSATO MORTO (dead moat), which can be seen today around the inner walls of the castle, was the original moat around the medieval town walls.

The other part of the quadrilateral is covered by the ROCCHETTA and the DUCAL COURTYARD. The Rocchetta is the most protected area. Situated in the northwestern part of the castle, it is provided with high windowless walls, an inner courtyard and a square tower facing the surrounding countryside named TORRE CASTELLANA. On the ground floor of this tower is the SALA DEL TESORO (Treasury room), which contains the beautiful frescos painted by Bramantino. The Ducal Courtyard encloses the TORRE FALCONIERA. On the ground floor of the tower is the Sala delle Asse decorated with paintings by Leonardo da Vinci. On the first floor is the Sala XX, which was the bedroom of duchess Isabella d'Aragona, Gian Galeazzo Sforza's wife.

The U-shaped Ducal Courtyard encloses a pretty garden. On the short side is the PORTICO DELL'ELEFANTE, named after a fresco that is painted on the arcade. An elegant ramp of stairs leads to the LOGGETTA DI GALEAZZO MARIA, the ducal loggia on the first floor. The moat enclosing the above-mentioned quadrilateral was in its turn surrounded by another circle of defensive walls built during the Renaissance period with the aim of protecting both the walls to the east and west and the façade on the back facing the Sforza family's garden, the so-called BARCO. This second circle of walls was called GHIRLANDA. Provided with three circular towers and connected to the inner space by means of the RIVELLINI, (RIVELLINO DI SANTO SPIRITO, RIVELLINO DEI CARMINI), the Ghirlanda was destined for defensive purposes in case of attacks coming from the countryside.

Posted by disha patel at 6:13 PM No comments: Links to this post

Leonardo was responsible for the decoration of the ceiling and vault of the Sala delle Asse (translation: 'room of the tower' or 'room of the wooden boards') in Sforza's castle, Milan and although this cannot be considered a 'painting' in the usual sense of the word to not mention it would be unforgivable. He was presented with this room for his own use; access being gained via a bridge and arcade he had built over the moat.

Painted between 1495--1497, the fresco is made up of eighteen willow trees, two of which skillfully encircle two windows in the room . Where the boughs meet towards the ceiling they intertwine, thought to be a symbol of the marriage of Ludovico, Duke of Milan with Beatrice d'Este. Emblazoned throughout the branches is a fantastic golden rope made up of assorted loops and knots. Appearing to be several ropes, if it is followed the viewer discovers it is actually just the one cord which folds back on itself, twisting and turning throughout the entire pattern. Gold rope was a fashionable symbol of the day and appeared knotted on the clothing of Beatrice d'Este. Included in the work is the coat of arms of the Sforza family (falcons and serpents) which is painted in the very centre of the ceiling where the tree branches meet. Finally, four tablets were hung in the corners of the room to record important historic and political events of the day. 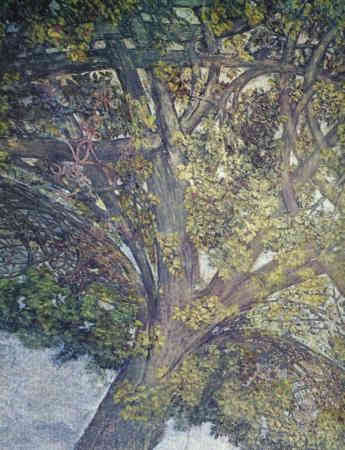 Much of the work on the 2,880 square foot canopy was carried out by Leonardo's pupils, but he did the design and this is a play on the word vinci, one meaning of which is willow. The search for any other hidden significance among the designs still continues, however it appears there is none to be found.

The hall was then used as a barracks and the paint deteriorated and flaked away. In 1901 a restoration was begun by Luci Beltrami; just enough of the original paint remained for this to be successful, but the work done was so extensive that the fresco was largely remade and repainted. Beltrami completed the restoration by taking the few remaining traces of the original and repeating the designs and motifs until the entire vault was covered. Like the Last Supper, this is not the work Leonardo would have originally presented to the world.

Further restoration went on in 1954 during which time a thorough cleaning of one small area was done and some boards removed which had been left untouched during the previous restoration; this revealed to some extent exactly how much the fresco had been altered by over painting. Originally the work was more open between the trees and branches, with the paint being less heavy, the leaves and branches more wavy. Large rocks were revealed through which roots were intertwined rising into huge tree trunks. Restorers of 1954 restrained themselves from completely removing all of the reconstruction done by Beltrami, restricting their own work to removing the heaviness evident in the new painting. With this they hoped the scene would achieve a more naturalistic look something Leonardo would have aimed for.

Posted by disha patel at 5:54 PM No comments: Links to this post 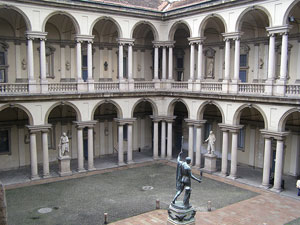 Posted by disha patel at 4:19 PM No comments: Links to this post 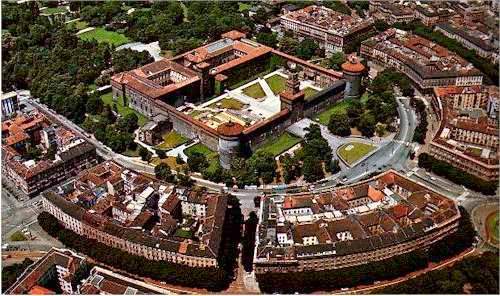 is one of the symbols of Milan together with the Madonnina and the Galleria Vittorio Emanuele II. Built within ten years between 1358 and 1368 under Galeazzo II Visconti. The Castle was partly destroyed in 1447 because of a decision of the Ambrosia Republic, it was rebuilt during Francesco Sforza’s period. The Castle suffered many adversities until 1880 when the government wanted to destroy it. The good sense prevailed and the Castle was restored under Luca Beltrami’s direction. The entrance is situated under the tower of Filarete; on the back you find the Bona di Savoia’s tower and on the left side the Rocchetta, a fortified part inside the Castle useful to get refuge during war attacks. The Rocchetta has a three sides internal portico, and inside its rooms there is the famous Bramante’s “Argus”. The Ducal Court was usually the residence of the lords. One of the rooms of Ducal Court, the “Sala delle Asse” is thought to have been frescoed by Leonardo da Vinci.

Posted by disha patel at 3:36 PM No comments: Links to this post